The Results are Released for Leg 2 of the Los Suenos Triple Crown!

2,754 billfish released during the Second Leg of the 2016 Los Sueños Signature Triple Crown by 43 teams 12 years of tournament records shattered!

Imagine releasing 75 billfish in just three days and not even making it into the top 10 boats! Over the course of the competition, 108 anglers on the world’s most competitive saltwater sport fishing teams released a total of 2,754 billfish. To put this number in perspective, the fish to boat ratio is 64 fish per boat in three days, or close to 2 fish each and every minute of the tournament. Incredible numbers and incredible teams in an incredible place – beyond compare!

It was an incredible three days of competition that provided a new benchmark in billfish tournament competition.

Agitator, a 51’ Scarborough, is participating in a Los Sueños tournament for the first time at the 2016 Triple Crown. Having won second place during Leg One in January the team has started a solid winning streak. This time, Captain Jon Duffie took his anglers, Jonathan Duffie, Judith Duffie, Danny Gough and Charles Gerlach straight to the top of the podium. Agitator is now in an excellent position for the Triple Crown Showdown, where the Series Champion will be crowned on April 2nd. 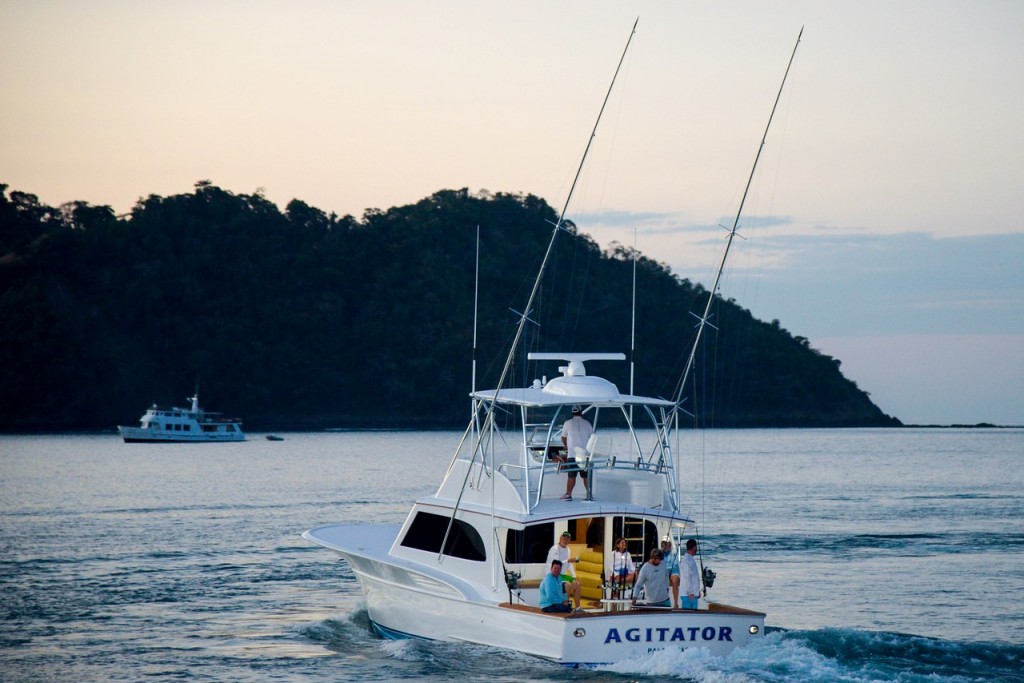 Pelese has consistently been among the top performing teams to fish at Los Sueños. This tournament marked the first podium finish for this team of dedicated anglers, landing in second place, only 100 points behind the winning team. With Captain John Lagrone at the helm of this 60’ Spencer, Los Sueños owner Marc Stanley and his fellow anglers gave a handsome performance.

Spanish Fly, a 42’ Maverick built in Costa Rica, has fished the waters off the coast of Los Sueños for more than a decade. Captain Daniel “Danny” Espinoza is a local legend. He has led anglers Larry Drivon, Richard Lebo, J Godwin and Juan Carlos Fallas to success several times, including a first place finish during the first leg of the 2014 Signature Triple Crown.

TOP ANGLER
Congratulations to Carlos Gonzalez of Gunsmoke on releasing 40 sails for an individual total of 4,000 points.

The top team from each leg of the Los Sueños Signature Triple Crown will be eligible to compete in the 2016 Offshore World Championship. For further information, please visit www.offshorechampionship.com.

ABOUT THE LOS SUENOS SIGNATURE TRIPLE CROWN
2016 marks the 3rd Annual Los Sueños Signature Triple Crown billfish tournament series. The Triple Crown consists of three annual tournaments, in January, February and March each year, and is fished out of the world class Los Sueños Resort and Marina in Costa Rica. The dates for 2016 are Leg I: January 20-23, Leg II: February 24-27, and Leg III: March 30-April 2. Mark your calendars! The dates for 2017 are already scheduled – Leg I: January 18-21, Leg II: February 22-25, Leg III: March 22-25.

Experience this tropical retreat and nature lover’s paradise, overlooking one…

Set between two spectacular lagoons, one salt water and one…